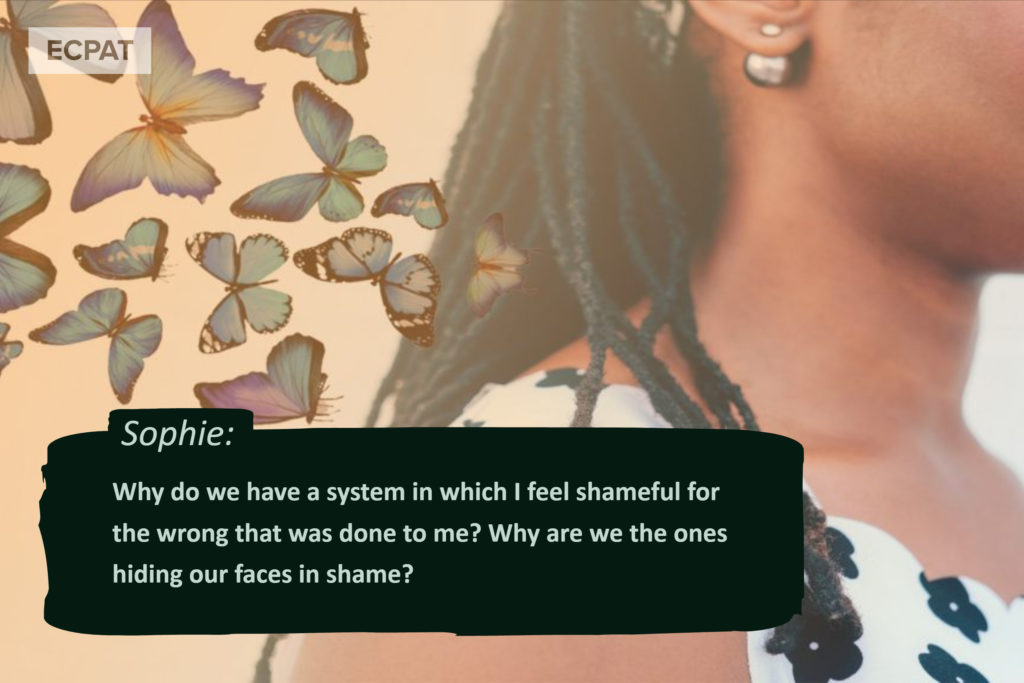 Sophie was only 13 when she was taken from her home and exploited at the hands of a relative. Barred from attending school and forced to perform household chores, she was left destitute precisely when she needed support and care the most.

“All regions are affected, and all countries can be a destination, source and transit point for traffickers.”

Human trafficking for the purposes of forced labour or sexual exploitation is the third largest crime industry in the world, behind drugs and arms trafficking. Almost one third of human trafficking victims in the world are estimated to be children. Far from being restricted to less developed countries, human trafficking sees no boundaries and affects various groups of people regardless of their gender, age, or ethnicity. All regions are affected, and all countries can be a destination, source and transit point for traffickers.

A complex crime is difficult to discover
Commonly understood as “the recruitment, transportation, transfer, harbouring or receipt of a person by such means as threat or use of force or other forms of coercion, abduction, fraud or deception for the purpose of exploitation,” human trafficking, is not always easy to recognize. Many social service providers may have encountered clients who have experienced forms of trafficking, though clients may not disclose this to practitioners, and in some cases, may not even self-identify as victims.

“We now understand that children and men are represented among victims in much higher numbers than previously thought.”

Although a large number of detected trafficking victims are women (almost 60 percent based on UNODC estimates), we now understand that children and men are represented among victims in much higher numbers than previously thought. The latest figures also show that a growing number of cases take place at the domestic or regional level, with research showing that traffickers and their victims often “come from the same place, speak the same language or have the same ethnic background.”

Victims of human trafficking have diverse backgrounds
Factors leading to trafficking are wide-ranging and complex and can include poverty; globalization; corruption; weak rule of law, and poor law enforcement. It is important to keep in mind however, that victims and survivors of human trafficking have diverse socio-economic backgrounds; varied levels of education; and may be documented or undocumented. Many are deceived or coerced, initially believing that they have been hired for a real job, or that they are going to get married, before finding themselves trapped and powerless.

Law enforcement bodies are key in dealing with the identification and protection of victims, but they are far from alone in fighting human trafficking and social services providers are a big part of the solution in support for victims and in moves to eradicate this pervasive crime. The ECPAT Network, plays an active role in the fight against the trafficking of children for sexual purposes: both on the frontline, by providing helplines and direct support to victims; and behind the scenes, by conducting research, advocacy and policy monitoring. A number of ECPAT members act to prevent children from being trafficked and sexually exploited, particularly through early or forced marriages, prostitution, by travellers and tourists and in online child sexual abuse material.

Support and care vital for trafficking victims
In many ways, the needs for social care of trafficking victims don’t differ substantially from those of other clients seeking care from helping professionals. A range of supports can be provided – from counselling to cope with traumatic experiences, through to supported reintegration back into communities – with attention to the push factors that may have put people at risk in the first place.

“Now is the time to unite, to act and put an end to this crime, collectively and permanently.”

In serious cases, particularly involving children, specialist care and support is necessary. Some members, like ECPAT Foundation in the North of Thailand, employ specialist child protection staff with social work backgrounds to educate young people on the risks to consider when migrating for work, relevant laws to protect themselves, and how to access support when they need it. However, despite making headway in protecting children from trafficking and exploitation, ECPAT International cannot abolish the practise on its own and needs the help of other organisations and individuals to do so. Now is the time to unite, to act and put an end to this crime, collectively and permanently.

Launching our Global Boys Initiative: The Sexual Exploitation of Boys in Thailand