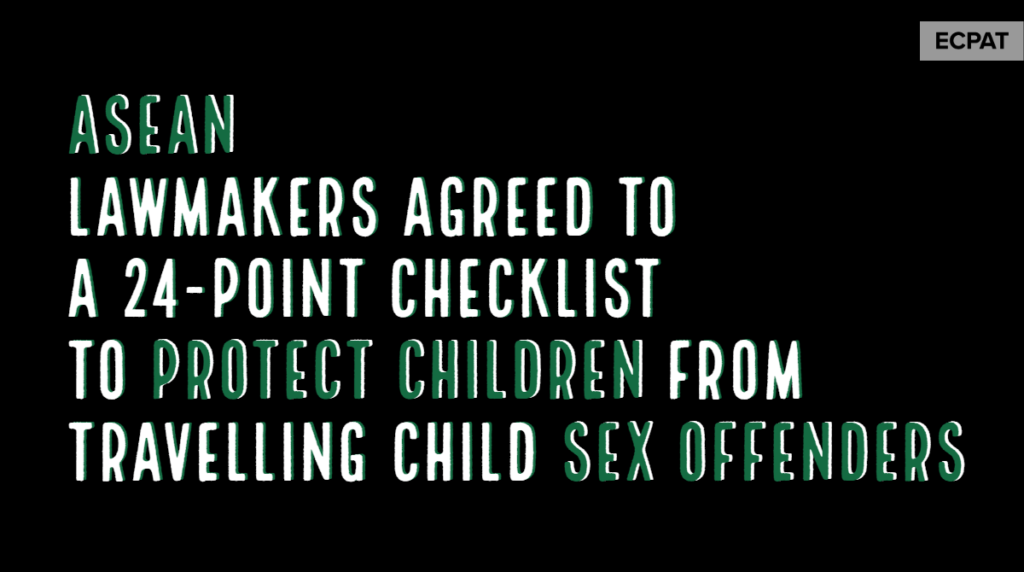 Parliamentarians from the ASEAN Member States have agreed to take steps to bolster their laws to tackle the growing problem of child sexual exploitation by travellers and tourists.

Meeting in Malaysia this week as part of the 10th ASEAN Inter-Parliamentary Assembly (AIPA) Caucus, lawmakers agreed to a 24-point “checklist,” which will guide future legal interventions to protect children in their home countries. This is a significant development for the region, which has seen an increase in child sexual exploitation in recent years – in tandem with the massive growth of the travel industry.

Full details of the checklist are to be released at a later date, but some of the provisions that lawmakers from each of the ASEAN countries will bring forward include:

During discussions, AIPA’s Members of Parliament (MP) shared similar concerns over the increasing cases of child sexual exploitation in travel and tourism across the region and acknowledged that variations in legislation between AIPA member states has complicated tackling the issue. All delegates agreed that legislation needs to be harmonized to close the gaps related to protecting children.

“The ASEAN region now hosts millions of travellers and tourists every year, which has fueled significant economic growth and prosperity. However, the growth of the sector has not been matched with an expansion of laws to protect children. The AIPA decision to harmonize the regional approach to ending this crime is a welcome step in the right direction.”

ASEAN is the first region where this a legal checklist will be used as a tool for harmonizing legal frameworks, cross border law enforcement and justice system cooperation.

“This is an opportune and fitting time for the meeting to have convened in Malaysia – as next year is Visit Malaysia Year 2020. We’ll see an influx of tourists from the region and all over the world, hitting at least 30 million, of which undeniably will also consist of sex predators.

This is just the beginning of great things to come to protect all children in the ASEAN region from sexual exploitation – especially through travel and tourism.”

Kasthuri Patto, MP for Batu Kawan, Malaysia and Chairperson of the AIPA Working Group on Strengthening Legal Frameworks to Protect Children from Sexual Exploitation in Travel and Tourism

The legal checklist was developed by AIPA through its Project-Based Initiative “Strengthening Legal Frameworks to Protect Children in Travel and Tourism.” It is based on the Global Study on Sexual Exploitation of Children in Travel and Tourism, developed with input from 67 partners from around the world. AIPA developed the check-list through a consultative process involving parliamentarians and representatives of ECPAT International, UNICEF, Interpol and other key partners.

Protecting children in travel and tourism and ending impunity for travelling child sex offenders was a key commitment made by world leaders, governments, the private sector, NGOs and regional organizations, including AIPA – at the first International Summit on Child Protection in Travel and Tourism, held in Bogotá, Colombia in June 2018.

Read full report: Offenders on the Move – Global Study on the Sexual Exploitation of Children in Travel and Tourism