A new report reveals that trafficking of children in Bosnia and Herzegovina is on the rise there and could reach alarming levels unless action is taken. The report also highlights that criminals are training children to beg and offer “sexual services”, that child victims sometimes are treated as criminals by the police and that the weak legislation in the country is exacerbating the problem.

The joint study by ECPAT International and local ECPAT member IFS-EMMAUS says that destitution, discrimination against ethnic minorities and social exclusion are fueling this crime, and that while arrests represent just the tip of the iceberg, the report says that 57 human trafficking and related cases were prosecuted in the country in 2017, of whom 39 were child victims. Amela Efendic, Expert Advisor to IFS-EMMAUS, says:

In Bosnia and Herzegovina, social prejudice often leads public sentiment to brand trafficking victims, including exploited children, as willing prostitutes and so they attract little empathy.”

The report notes that in the popular tourist city of Mostar, clandestine human trafficking of children for the purpose of sexual exploitation is happening undetected, and cites Bišće Polje, south of Mostar, as an example of a place that “has become an unofficial collection center for trafficked Roma children from within the country, Kosovo and Serbia.” According to government sources, children there are sometimes taught the “skills” they need for their own sexual exploitation, with traffickers targeting vulnerable and poverty stricken families, including children with disabilities and even “training” them to beg and offer “sexual services.” 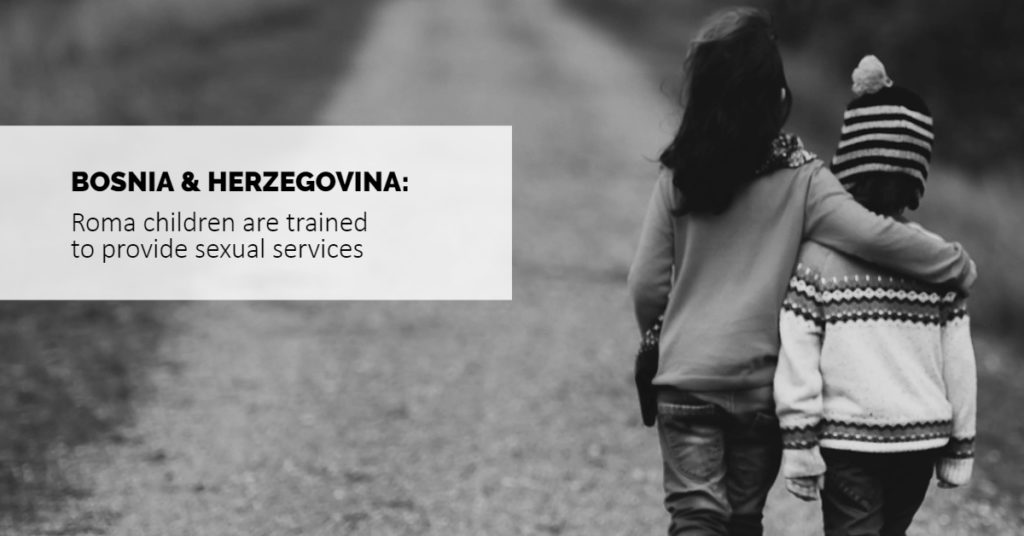 Trafficking of children in Bosnia Herzegovina mostly occurs within the borders of the country. But recently, there have been sporadic cases of cross-border trafficking as well, with some children trafficked to other European nations according to the report.

At the same time, the report says that the recent rapid increase in Balkan tourist arrivals has also increased the risk of child sexual exploitation.

With tourist numbers increasing by about eight percent per year in the last few years, and more than 1.3 million visitors in 2017 (to a country of only 3.5m), Bosnia and Herzegovina is now one of the most visited countries in the region. But high numbers of outsiders can make it difficult for communities to monitor the safety of children. Amela Efendic at IFS-EMMAUS continues:

“Low-cost airlines, more travel for business and labour, cheaper forms of tourism and rapid tourism development often expose children to greater risks. With BiH’s tourism industry steadily growing, the risk to children is also growing. There is an urgent need for improvements in the legal framework to combat this threat.”

The country currently has no concrete legislation or legal provision that deals with the sexual exploitation of children by travelers and tourists, however, some travel and tourism companies have signed codes of conduct and agreed to take action to protect children, such as training their staff on how to react to suspected cases of child sexual exploitation.

Other laws to protect children are also lacking in the country and this is affecting the behaviour of offenders.  The complex legal framework in Bosnia and Herzegovina, exacerbated by some noted instances of corruption amongst the police allows organized criminals to exploit weaknesses in the system. For example, the country’s law that criminalizes “enticement to prostitution” has resulted in law enforcement officers treating children who are 14 years or older as offenders, instead of treating them as victims.

Sexual exploitation online on the rise

The report also notes that Bosnian law enforcement officials even found literature online that trains potential sex offenders on how to communicate to and gain the trust of children, and between 2013 and 2018, there has been a concurrent increase in child sexual abuse material identified in the country.

Bosnia and Herzegovina continues to be one of the few European states that does not have a register of child sex offenders. However, this is slowly changing with the Assembly of Republika Srpska (one administrative unit of the country) recently adopting the ‘Law on Special Registry of Persons Finally Convicted for the Criminal Offenses of Sexual Abuse and Exploitation of Children,’ which will give police and legal officials access to a list of offenders who are convicted for trafficking children, abusing children, having a spousal relationship with children, exploiting children to make child sexual abuse material, using digital technology for the commission of the sexual abuse of a child, or “referring” a child to prostitution.

Read the full report on trafficking and sexual exploitation of children in Bosnia and Herzegovina.