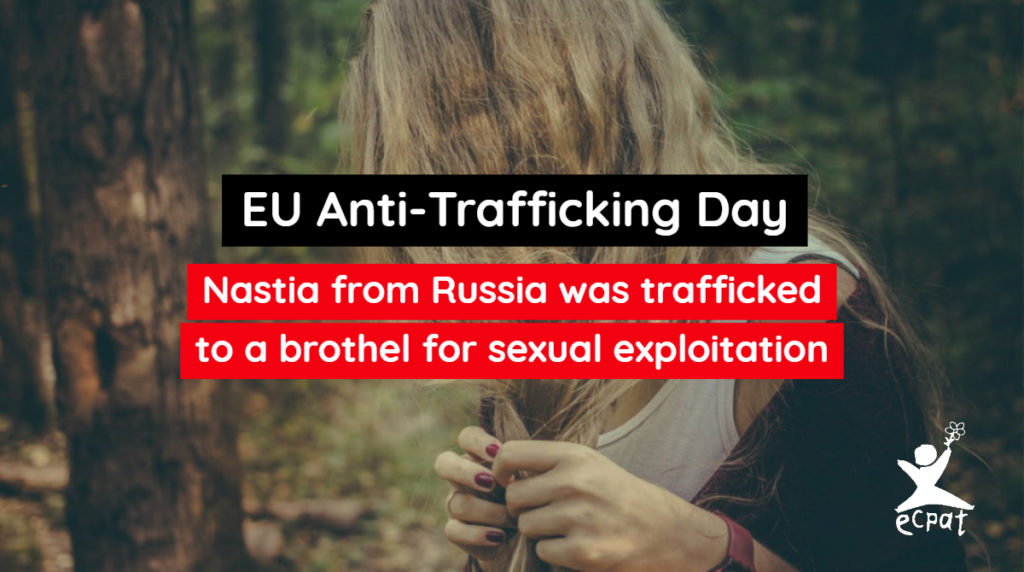 Today is EU Anti-Trafficking Day – an occasion to reflect upon how we respond to the trafficking of children for sexual purposes. The extent of the problem has reached an estimation of 40 million victims per year, 20% are children. Unfortunately, no child is immune, children are being trafficked and exploited in every region of the world, both girls and boys. Nastia is a teenager from Russia and her story is not unusual, as many other girls, she was trafficked for the purpose of sexual exploitation.

40 million victims of trafficking globally every year, almost 20% are children.

Nastia was born and raised in the far Eastern region of Russia. After she graduated from school, she couldn’t enter the university or vocational school so she started to look for work on the Internet. Nastia turned to an agency which promised her work in a big city far away from home. It seemed like a good opportunity, but as soon as she arrived she was transported to a brothel. Nastia was held captive in the brothel and for three months she was sexually exploited. Luckily this brothel was raided by the police, and Nastia and children could be rescued and taken to a shelter. They helped Nastia to process her trauma in a safe environment and she could eventually interact with other people again.

Trafficking of children for sexual purposes is a global issue and it happens all over the world, both online and offline. While exact data is difficult to find, some numbers shed light on the magnitude of the problem:

The consequences of sexual exploitation are devastating for every child. Although victims of trafficking are predominantly women and girls, men and boys are also affected. Victims are taken out of their protective environment to be recruited, transported, transferred and harboured by exploiters.

ECPAT is working to stop all forms of sexual exploitation of children, including trafficking. Our members in Eastern Europe and Central Asia provide supporting services, work on advocacy to ensure better prevention of child trafficking and protection of children like Nastia. They contribute and submit reports to global and regional mechanisms calling for more effective measures improving the situation of victims of this serious crime.

The majority of trafficked children were used for sexual exploitation.

At the global and regional levels, we have expanded our participation in advocacy initiatives and partnerships to end human trafficking, including Alliance 8.7, Freedom from Slavery and Girls Not Brides. Also, ECPAT frequently represents the voice of civil society in seminars, meetings, conferences, and events.