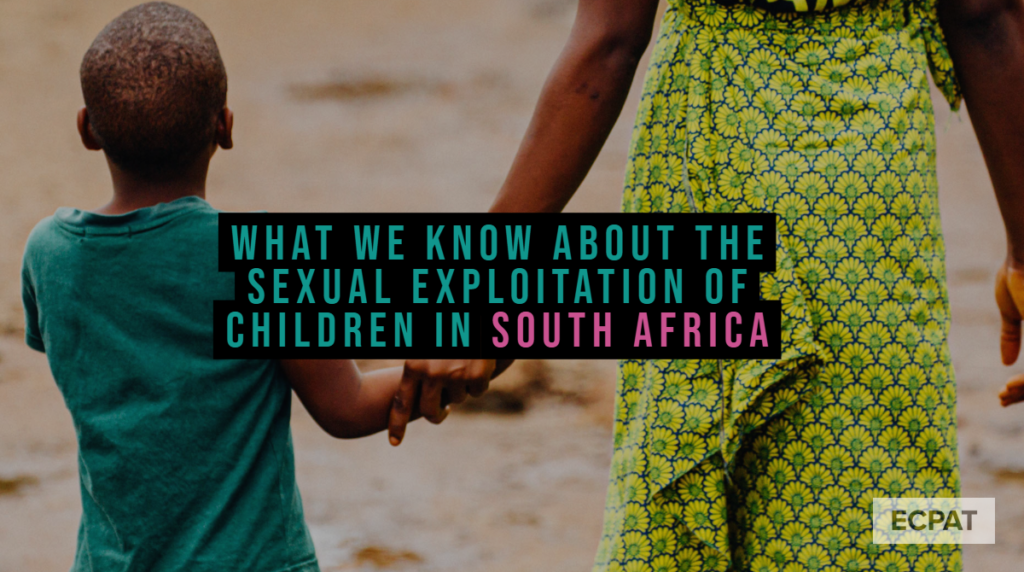 A new briefing paper jointly launched today by ECPAT International and the Youth Research Unit of the Bureau of Market Research at the University of South Africa, warns that high levels of violence, inequality and poverty are leaving South African children at considerable risk of becoming victims of sexual exploitation.

CAMPAIGN SITE: What we know about the sexual exploitation of children in South Africa

South Africa has ratified all the major international conventions and frameworks, and in most cases has comprehensive national laws to protect children from sexual exploitation. In addition, several national plans are in place to implement the country’s policy for the protection of children. However, professionals interviewed for the ECPAT paper said the issue is not a lack of policies and laws, but gaps in funding, weak monitoring and enforcement, and mediocre coordination by government departments to implement them.

South Africa has made huge progress to reverse structural inequalities in recent years, but is still considered to have one of the highest levels of inequality in the world. Poverty is highest amongst children, and welfare professional interviewed in ECPAT’s report confirmed that it is often associated with sexual exploitation.

The briefing paper also highlights that violence continues to be widely experienced by South African children in their schools, families, and communities. In response to the recent increase of reports on school-based violence, the YRU has conducted an explorative research study in secondary schools in Gauteng, investigating school-based violence. The results of the study will be released early 2020. School-based violence – including instances of corporal punishment by staff – remains a concern, and discourages abused and exploited children from seeking help.  Such violence can even create circumstances for sexual exploitation to flourish. School-based behaviour-change programmes – like promoting alternatives to corporal punishment or peer leadership projects challenging gender-based violence or harassment – are urgently needed to address young people’s attitudes towards violence and abuse.

“The data shows that high levels of sexual violence continue in South Africa. The message this sends must be counteracted by building positive and supportive environments in schools or violence will continue to pass from generation to generation.”

— Mark Kavenagh, Head of Research and Policy at ECPAT International

Inconsistencies and loopholes exist through numerous South African laws regulating marriage, including exceptions which allow marriages of children below 18 to occur. The tribal custom of Ukuthwala, bride kidnapping, is practiced in some regions and is considered a risk factor for sexual exploitation. It has been noted by experts to increasingly involve kidnapping, rape and forced marriages. Despite a 2015 draft bill prohibiting forced and child marriages, as of October 2019 no legislative reform on this issue has occurred.

“South Africa ratified the African Charter on the Rights and Welfare of the Child and therefore has committed to establishing the minimum age of marriage at 18 years old for both boys and girls with no exceptions.”

Briefing Paper on Sexual Exploitation of Children in South Africa

The Landscape of Sexual Exploitation of Children in South Africa

Out of the Shadows Index

Together to protect Phuket’s children from sexual exploitation