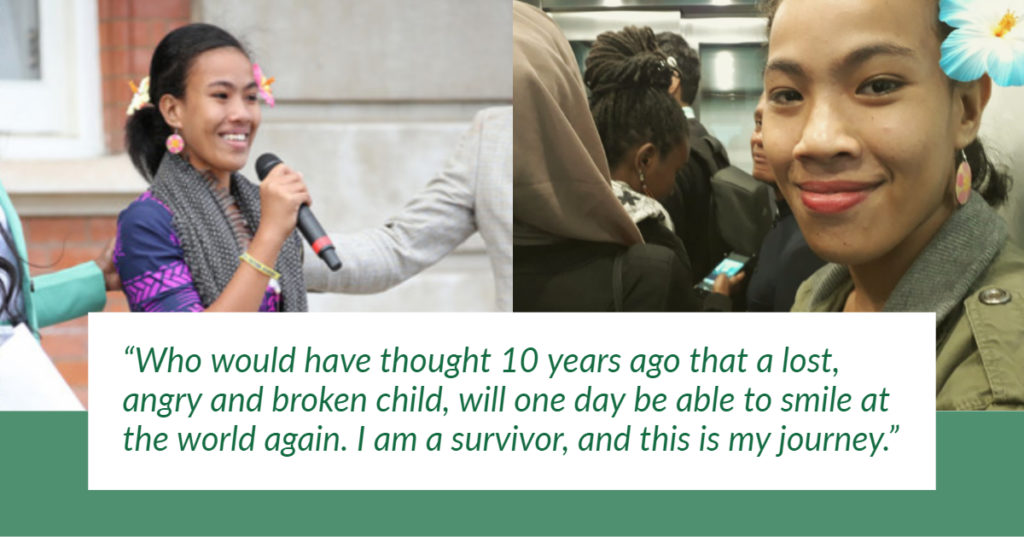 Leilua Lino was raped by her biological father when she was 9 years old. She felt abandoned by her family when she needed them the most, and it wasn’t until she told her best friend Rosalina about the abuse that she asked for help. Samoa Victim Support Group, the ECPAT member in Samoa, knew about Leilua’s case and reached out to offer her support. They helped Leilua during the legal process, but also to channel her anger so it could help others.

After years of suffering alone, she decided to share her story what empowered her to start an impressive journey of advocacy work for abused children in Samoa. She created a Peace Garden in 2017, a place for peace and healing. Today, the garden had a positive impact on 20,000 children.

“Who would have thought 10 years ago that a lost, angry and broken child, will one day be able to smile at the world again.  I am a survivor, and this is my journey.”

Recently, Leilua received a special prize in London during the celebration of the 70 anniversary of the Commonwealth. This award recognises and celebrates social innovators making an impact.

Apart from Leilua, there are awardees from a range of countries who have also bring prosperity to their communities; revolutionary ideas that promote peace and justice to advance towards a better world.

“There are six of us, and as we were introduced to each other and started sharing our stories, I could see how my life differs from the others. I could also see how I am fitting in well with the others.”

Leilua is determined to continue helping other victims and give relief to the ones who need it. She wants to speak out and remind other child abuse survivors that they are not alone, that there is always someone out that can help them. Her journey has just started.

“I am an abused survivor who releases her anger by digging the soil; who finds peace in planting a Garden.  All I know is that I want to make a difference in the lives of other children like me.”

New research on the sexual exploitation of children in the Pacific

ECPAT International has recently released a new survey about the sexual exploitation of children across the Pacific Island Region. We talked to 84 frontline welfare workers from Fiji, Solomon Islands, Kiribati, Vanuatu, Papua New Guinea, Tonga and Samoa about their recent caseload. The survey suggests that sexual exploitation of children is more common in the region than previously thought, as 756 cases have been seen in the last 12 months.

>> Find out more about Leilua story <<

*The photo of Leilua is sourced from the Samoa Observer. ECPAT International typically discourages the use of images that could compromise the privacy of victims, however, Leilua is a consenting adult and has made a deliberate decision to publically identify herself as a survivor of sexual abuse