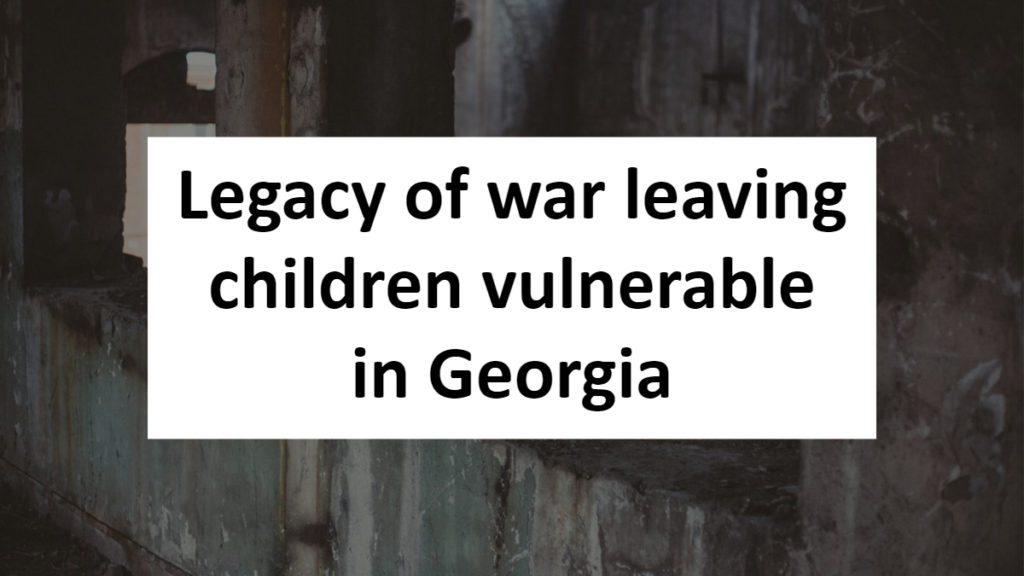 A new review of the sexual exploitation of children in Georgia says that some children in the country are at significant risk from abuse – including many still displaced by the protracted military conflict with Russia.

The ECPAT Country Overview of the Sexual Exploitation of Children in Georgia, released this week, reviews the sexual exploitation of children online, by traveling child sex offenders, through prostitution, within early and forced marriage and by human traffickers.

The report emphasizes the legacy of the long-running conflict between Georgia and Russia over the South Ossetia and Abkhazia regions, which began in the 1990s and escalated into a full-scale war most recently in 2008.

“The estimated 65,000 children who remain internally displaced from conflicts in Abkhazia and South Ossetia, as well as children living and/or working in the streets and children from socially marginalized groups are among the most vulnerable to sexual exploitation,”

says the report, with Georgia identified as an origin, destination and transit country for children trafficked for sexual purposes.

The situation in Georgia underlines how humanitarian crises can exacerbate inequalities and vulnerabilities. There are about 260,000 people in Georgia who remain displaced from their homes after conflicts in the 1990s and a decade ago. They are coping with continued disadvantage – and many of them are children. Mark Kavenagh, ECPAT’s Head of Research explains:

“These children remain vulnerable to forms of abuse because of poverty, pressures to survive and reduced access to services like education. Criminals, traffickers – and others who would harm children thrive in this kind in unstable environment and we know that children are more likely to be victims,”

Positive efforts to address the issue

A range of positive efforts from Georgia to address the sexual exploitation of children are noted in the report, although it also highlights that some areas need more than lip service. For example, in line with commitments that the government has made to the Sustainable Development Goals, Georgia has established a database for victims of trafficking and offenders. Between 2016 and 2017 however, the government identified only one child (a girl) as a victim of sex trafficking. Kavenagh says:

“It is likely that the reported cases severely underestimate the scope of the trafficking of children for sexual purposes,”

ECPAT is also critical of Georgia’s high levels of child marriage. The new report says that drivers of this phenomenon including strict social norms that discourage pre-marital sex, gender norms that strongly urge women to marry, and economic hardship that leaves early marriage as a financial option for families. Despite strong formal laws, cultural tolerance of early marriage, particularly among some ethnic groups means that the country has one of the highest rates of child marriage in Europe. In a survey conducted by UNICEF, 14 percent of women aged 20-24 said they were married before the age of 18 – the country’s legal minimum age to wed.

The report also says that the sexual exploitation in Georgia is exacerbated by child labour, highlighting the fact that there are more than 1,500 children working and living in the streets of Georgia’s four major cities, with ethnic Georgians, Romani and Azerbaijani Kurds overrepresented among street-connected young people.