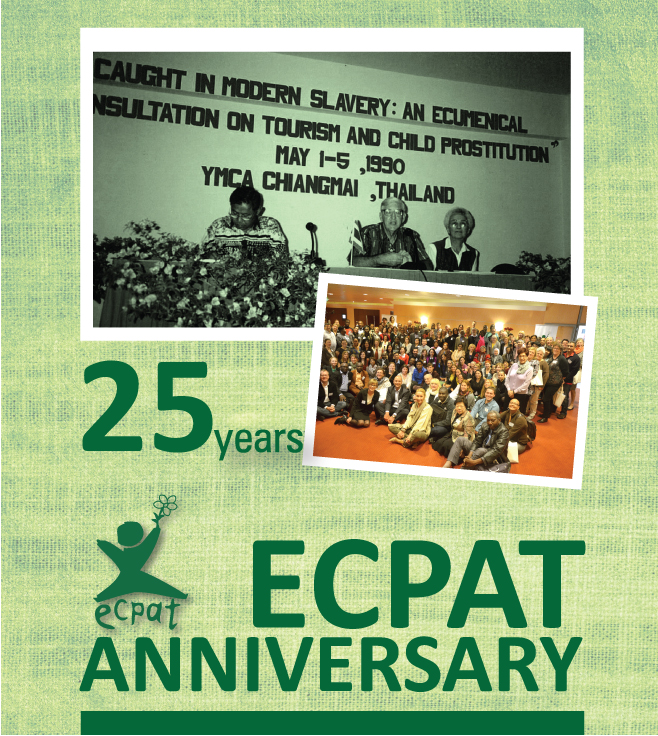 Twenty-five years to this day, the idea of a campaign to ‘End Child Prostitution in Asian Tourism’ was launched in Chiang Mai, Thailand, by a small group of concerned individuals and organisations from across the globe.

In May 1990, a group of researchers and social workers, representing a number of organisations and faith-based groups from Thailand, the Philippines, Sri Lanka, Taiwan and India, and other places, had gathered in Chiang Mai, Northern Thailand, for a Consultation on ‘Tourism and Child Prostitution in Asia’. Launched in 1991, the first ECPAT campaign ‘to end the sexual abuse of children by tourists’ was born out of that meeting.

Twenty-five years later, this campaign has evolved into a global network of civil society organisations, now known by the acronym ECPAT, dedicated to ending the commercial sexual exploitation of children (CSEC), with member groups and affiliates in 77 countries.

‘The 25th anniversary of ECPAT is a moment to mark, remember and celebrate but not a time to rest. Indeed, the experts consulted by ECPAT in 2014 all concurred that the magnitude and scope of sexual exploitation of children is actually expanding. This is the reality to face in 2015: the end of sexual exploitation of children still remains very much unfinished business’, said Carol Bellamy, Chair of the Board of Trustees of ECPAT International.

‘Over the course of twenty-five years, achievements were hard-won. They are the fruits of the dedication of ECPAT founders and the organisations they belonged to, and the many others who joined them, formed national groups, and took action to raise public awareness about the fate of millions of exploited children, while advocating with governments to improve and strengthen child protection laws and policies’ said Dorothy Rozga, Executive Director of ECPAT International.

Governments and civil society organisations worldwide recognise ECPAT as the only international NGO network solely dedicated to the fight against CSEC and, since 2003, it has Special Consultative Status with the Economic and Social Council of the United Nations. Many ECPAT members also directly advocate, run their own programmes, or build the capacity of other organisations that offer assistance to child victims of sexual exploitation, helping them to recover and reintegrate successfully into society. These and other activities are supported by professional staff within the network and at ECPAT’s International Secretariat, and a unique global pool of experts and advisors.

Today, ECPAT works to bring government policies into alignment with international child rights agreements and to assist governments to meet the goals laid out at the end of each of the three ‘World Congresses’, primarily through technical assistance and capacity building. It collaborates with global law enforcement agencies, such as INTERPOL and local authorities so that those who exploit children be found and brought to justice. It has partnerships with the private sector in key areas, such as travel and tourism and information and communication technologies, to keep children and youth safe online and in tourism destinations.

‘At this time when ECPAT, its supporters, friends and allies enter a new phase of its history, it is our privilege and honour to thank all those – individuals and organisations – who have made this incredible journey possible and will continue to encourage and support us in the future, in the name of the children of the world to whom our action is dedicated’, Carol Bellamy concluded.

ECPAT is a global network of 85 organisations working together in 77 countries for the elimination of child prostitution, child pornography and the trafficking of children for sexual purposes. ECPAT seeks to ensure that children everywhere enjoy their fundamental rights free and secure from all forms of commercial sexual exploitation.

ECPAT International has been leading the global discussion on the commercial sexual exploitation of children (CSEC) and is recognised as a strong and cohesive child rights advocacy network speaking on behalf of vulnerable children and child victims of sexual exploitation for 25 years. For more information, please visit www.ecpat.net