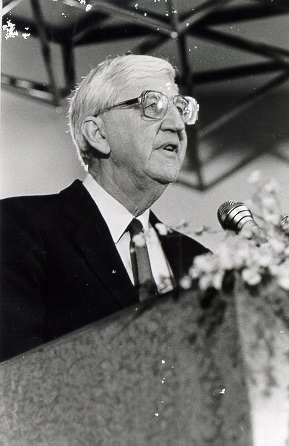 ECPAT conveys its deepest and sincere condolences to Ronald O’Grady’s wife Alison, his family and his many friends.

“Ron showed great courage and leadership in speaking out against the sexual exploitation of children in Asian tourism in the 1990s, when the issue was not yet recognized as a crime. His outrage and vision, shared by a small group of peers, led to the founding of the ECPAT movement. Ron’s passion and commitment will continue to inspire ECPAT’s work worldwide.”

O’Grady was one of 68 people – aid workers, activists, social workers, and government officials – who participated in the Ecumenical Coalition’s Third World Tourism Conference in 1990. Its participants learned that organised sex tours and individual tourists were increasingly arriving in Asian countries for the purpose of having sex with children. Foreign visitors were even establishing small colonies to engage in child sex abuse. Child brothels were sprouting up in Thailand and elsewhere. Dismayed and disgusted, O’Grady and his fellow activists decided to join together in a campaign to End Child Prostitution in Asian Tourism (ECPAT) and focus world attention on the plight of vulnerable children. Since its humble beginnings in 1990, ECPAT has grown into a global network of 81 organisations in 74 countries, committed to ending the commercial sexual exploitation of children.

Founder and Honorary President, Ronald O’Grady with members of ECPAT’s Child & Youth Advisory Committee
Ronald O’Grady was born in 1930 in Wellington, New Zealand. As a parish minister, then a leader within the ecumenical movement in New Zealand, Singapore and Australia, O’Grady’s many talents, charisma, idealism and outrage against injustice culminated in the founding of ECPAT. After retirement, O’Grady became Honorary President of ECPAT International and Patron of ECPAT Child ALERT in New Zealand. In 2011, at the ECPAT International Assembly, his inspiring keynote speech was met with a standing ovation.

Ronald O’Grady committed his life to protecting children. His work and life touched the lives of countless children, his legacy will continue.

O’Grady’s own words summarise the indignation he felt about the sexual exploitation of children, “I struggle to comprehend why anyone would want to sexually abuse innocent children” (Ron O’Grady, The Ultimate Challenge, 2012).

Alison O’Grady: Many children have been saved and perpetrators are being held accountable